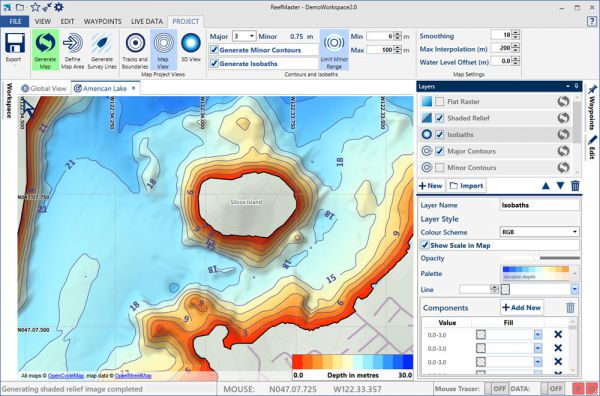 One of the first things you will notice when running ReefMaster v2 is that the user interface is a little different to version 1, with the addition of a set of menu bars running across the top of the application window, removal of the main toolbar at the left of the window and a new layers panel.

Menu bars have been a common feature of Windows applications for a long time, and feedback we got from some ReefMaster v1 users indicated a preference for this more traditional user interface.
ReefMaster now features a range of menus that run across the top of the main window, each of which contains a set of controls that can be used when viewing and editing the active window. The available menu bars vary depending on the type of asset that is active within the main window. For example, the Project menu is only available when a project is being edited.

The new menu bars can eat up a significant amount of screen space when running on smaller monitors. If this is an issue, consider collapsing the menu bar by double-clicking on any of the menu headers. The menu system will then operate in “pop-up” mode, and be visible only when a menu-header is clicked on.

The FILE menu is a special menu that contains many of the functions that used to reside in ReefMaster v1’s Main Toolbar. Within the file menu you will find functions including opening a new workspace, importing sonar logs, opening the Global Settings window and more.

Tide Stations have moved from the Asset List to become part of the Global Settings window.

Many controls now have informative “tool tips”, which are shown when the mouse point is held over the control for a few seconds. These replace the pop-up help windows of version 1. 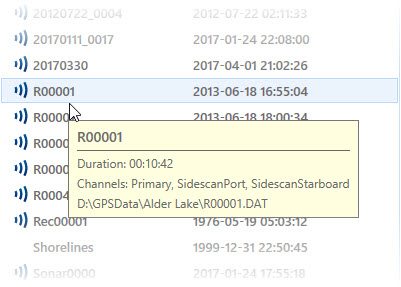 Information about a track can be displayed in a tool-tip by holding the mouse pointer over the track in the asset list at the left of the screen. This information includes the name and disk location of the source file and which sonar channels are available. If sonar is available for a track, a sonar icon is shown to the left of the track name. If sidescan sonar channels are also available, this is indicated by a sideways pointing sonar icon.

The layers panel to the right of the main window contains controls for map layers, and is only available when a Map Project is currently being edited.

Drag and drop is widely available within ReefMaster and can make a lot of operations quicker and easier.
Examples of drag and drop operations include:

There are many more keyboard short-cuts available in ReefMaster v2. These include common windows operations such as DEL, to delete the current selection, CTRL-Z/Y for undo/redo and CTRL-C/X/V for copy, cut and paste. Zooming within a map can be controlled by using the + and – keys, and the cursor keys can be used to pan the current map view.

Perhaps the biggest functional change between ReefMasters v1 and v2 is the combining of Projects and User Maps into a single new asset class; Map Projects. Map Projects contain all of the functionality (and more) of the old projects and user maps in a single, fully editable map. 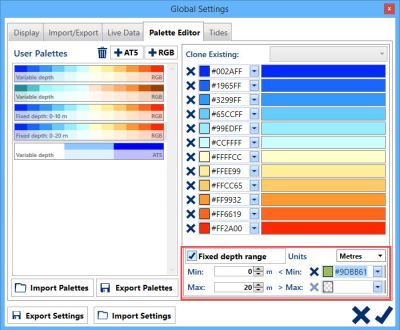 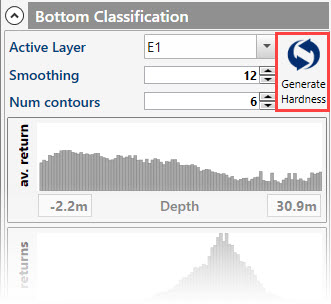 Map export is much improved, and with fewer limitations, over version 1.

A single water level offset field is now available that will offset every data point within the map by a fixed depth. This is very useful when generating maps to fit a certain lake water level. The simplest way to do this is to adjust all data to a known lake level (e.g. full pool), and then adjust the entire map by the required amount to fit the current lake level. Note that the map needs to be rebuilt after changing this option – it does not affect existing map components.

Spot Depths provide a simple way to add a small number of known depth points for use when generating the map. Spot depths are added and edited in the Spot Depths section of the Map Project Edit panel: 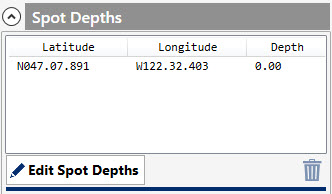 Survey Grids are a set of parallel lines that can be generated at a chosen bearing and spacing. The generated lines become a new map layer that can be included in a map export to help plan surveying sessions: 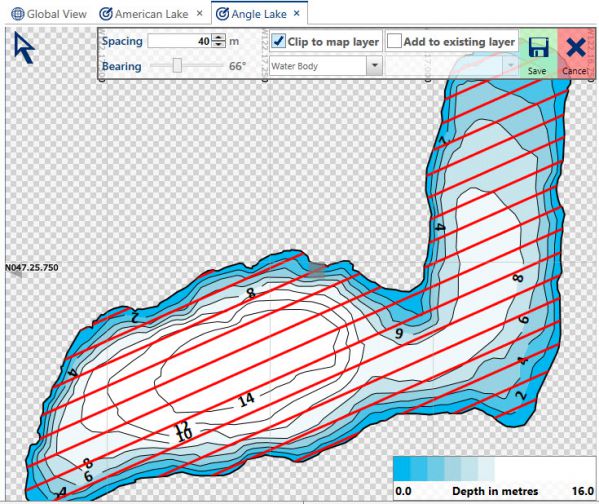 Track Editing and the Sonar Viewer

ReefMaster 2 uses hardware graphics acceleration when available to improve performance when rendering track-points, sonar and sidescan mosaics. The use of hardware graphics acceleration also allows new features such as image sharpening, noise reduction and automatic blending of sidescan mosaic swathes. If your computer does not have the necessary graphics hardware (a GPU with hardware support for Microsoft DirectX 10.1 or greater), then ReefMaster will "drop back" to software rendering. In this case, noise reduction, sharpening and automatic sidescan blending functions will not be available.

ReefMaster now creates index files for sonar logs, which are stored in the same disk location as the original sonar log file. Index files contain all of the required information from the sonar log, including sonar imagery, and allow for much improved performance when viewing sonar and sidescan data.

ReefMaster v2 now supports the new Lowrance SL3 sonar file format. The information that we can extract from this file is the same as that in the SL2 file format - we are not yet able to use the StructureScan 3D data, although this data can be recorded to the SL3 file format and may be usable at some point in the future.

Track-point editing functions have been improved in ReefMaster v2. One particularly useful new feature is that geographic range filters and depth filters can now be combined to produce a very powerful tool for removing bad depth points. Select a geographic region with the region select tool before adjusting minimum and maximum depth filters, and when the filter operation is applied only track-points that fall within the geographic extent and outside the specified depth range will be deleted.

Big changes to Sidescan Mosaic include automatic blending modes (made possible by the use of hardware graphics acceleration) and use of headings to better place mosaic imagery. In addition, mosaic imagery is now visible at all zoom levels when being edited in the track or sidescan mosaic edit windows.

Automatic blending across sidescan swathes means that ReefMaster can choose the "best" available signal return for display when data from more than one sidescan swath occupies the same geographical space. ReefMaster determines the "best" signal to be the signal that is closest to the transducer.
In practical terms, automatic blending allows multiple tracks to be added to a single mosaic to generate a seamless mosaic image with little (or no) further editing: 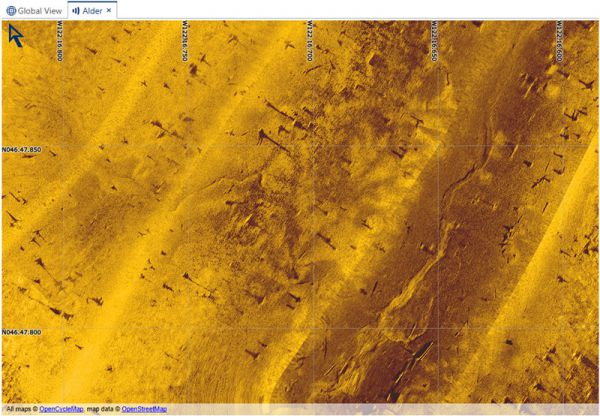 The image above is composed of 4 parallel sidescan swathes, rendered using the Blend Closest display mode. Note that the only visible joins are the between port and starboard channels of individual tracks - the joins between adjacent swathes are almost invisible - and no editing of port or starboard ranges has been required.

Curve and speed filters have been removed in ReefMaster v2, but may be restored at a later date.